A CRITstory with Thomas Duke 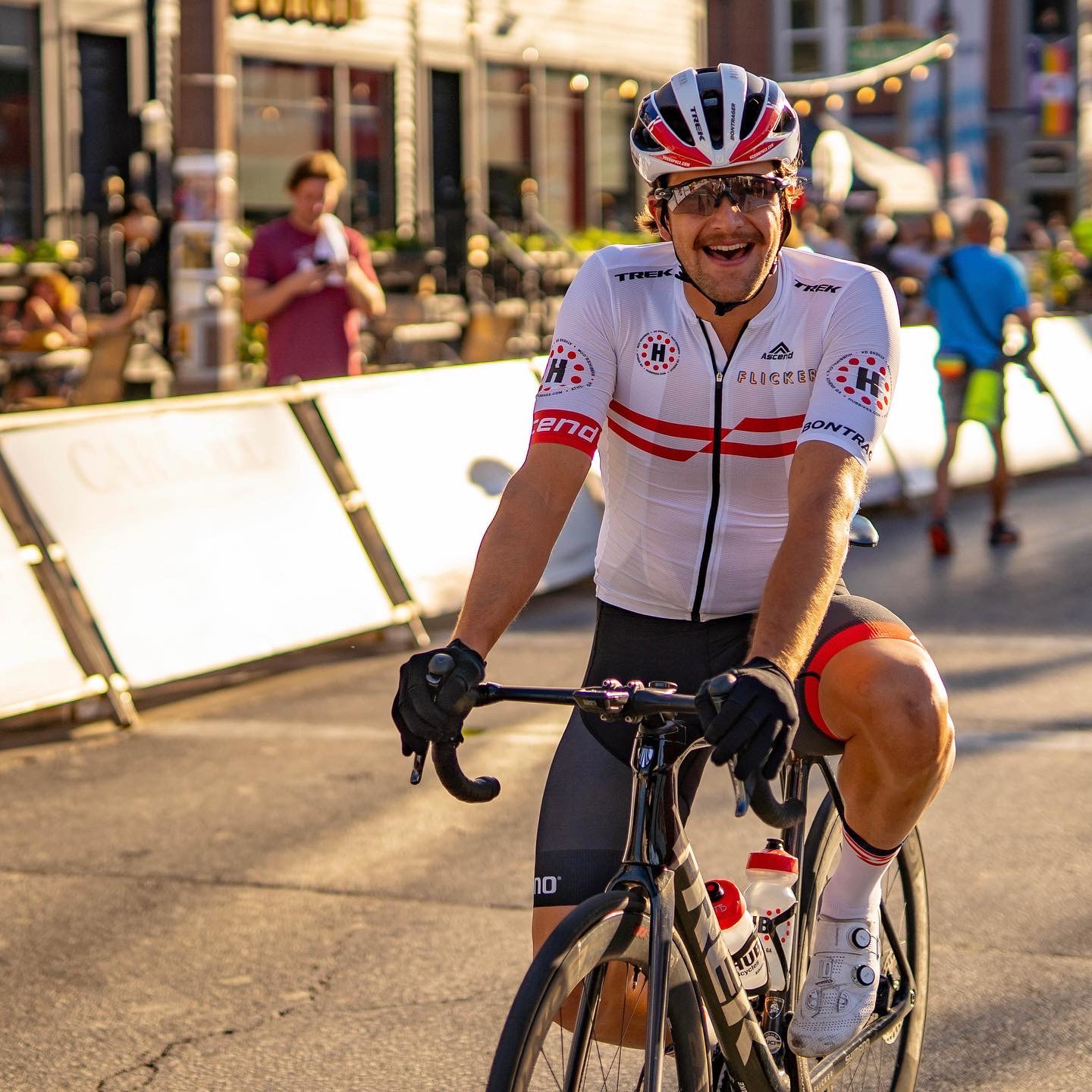 Sarah H asked Thomas Duke how he got into Crit Racing as The Team Principle of the Flicker/Hubbikes a Road Racing Team. Here is what he had to say:

My intro to road cycling occurred the night of April 26, 2014. Daniel Holloway won the Athens Twilight criterium and seemed pretty excited about it. You can watch it here.

A guy from the Tifosi sunglasses factory sold me a repainted Schwinn Continental. He had converted it to a single speed, perfect for riding up and down Baxter. There was a nice section of the seat tube that had rusted pretty much all the way through under the battleship gray rattle can job, but I had no idea. I eventually sold that bike to Ben’s Bikes, where they sold it to the next hapless student, who promptly brought it back in two pieces. I’m just lucky, I guess.

The next bike was a Cervelo Soloist I bought on Craigslist for $80. It had Ultegra FlightDeck, a carbon stem, and was in hindsight almost certainly stolen. I traded that bike with an air traffic controller in Peachtree City for a Chinese carbon clone of the first generation Specialized Venge, minus the wheels—those I got from a ceramics lecturer who had glued 23mm Continental Gatorskin tubulars to maybe the first set of wheels to ever exit the ENVE (or was it called Edge at that point?) factory, and it was a piece of trash. I knew it from the first ride, and I should have known earlier when Loehr Young was filing out one of the dropouts to get the front axle to sit straight. I knew nothing about anything. At this point in the whirlwind Brian took pity on me and sold me an extra Raleigh Militis frame for $300, and so it began.

My first race took place in a blazing hot parking lot sometime in late June or early July of the same year. I was on my third bike in three months and assumed that the only way to recoup my investment would be to just take-home cash prizes, because I was going to win everything to which I casually rolled up. And win I did. First place, Category 5. It was gorgeous. Twenty-five minutes of racing, an incredible final lap solo flyer with a fuse lit by the bell, which I assumed signified the finish. It did not—but the crowd of three parents of the juniors in the race provided on-the-job training and I held off the field of twelve-year-olds for a minute longer and claimed my prize—a pair of Specialized Socks, MSRP $29.99, no cash value, go home, you are done. I would not win another bike race for two years and would crash violently in my next two criteriums. The stage was set for a promising career.

Road racing, and more so criterium racing, is interesting. I don’t think there’s another sport that mixes in a healthy proportion of total amateurs with full-on professional riders in every race quite like cycling. Sure, this is not the case at the top of the sport—some guy that just bought his first Allez Sprint can’t just pop open BikeReg and sign up for the Tour of California—the Tour of California doesn’t exist anymore. That guy, can, however, instantly upgrade himself out of Category 5, win three, four, five or so parking lot criteriums, upgrade to Category 3, and boom, he’s in. This timeline can and does occur over a 2–3-month period. There is no other sport like this. It is absolutely mind-boggling and makes zero sense, but it keeps happening. The distribution of the spread of fitness and skill in these races is VAST.

But—Some Guy lies to himself. In the right circumstances, he can almost certainly win. These guys… they’re just guys. This is the mindset required to be an average joe in their first Pro/1/2 bike race. You’ve driven to middle America with a bike worth more than the Honda to whose roof your bike is attached, eaten your Chipotle, pinned your number to your team kit with all the local sponsors. You’ve never crashed. You’ve never been dropped. You’ve never lost. The future is bright.

There are eighty people in this street. It is not a parking lot. It is a narrow, cracked up street in a state you’ve never been to before. There are white metal barriers with plastic sponsor logos you’ll never remember zip tied to a few of them. You’ve done a lap of the course—just one, there were some kids in tricycles racing down the back stretch and the bartenders from the restaurants along the course doing keg stands in corner one, so you couldn’t really get a feel for the course—but you feel pretty good about where you line up. A guy with ice shoved down his jersey pushes his bars in on your left and you wonder how that’ll go when it’s time to clip in and go.

A farmer sings the national anthem. You take off your helmet right after it starts and get it put back on right before it ends. It’s 101 degrees and you can smell the tires melting, just a little, around you. The bodies of the other twenty-somethings Just Like You roll forward. Most get their feet into the pedals. You sprint as hard as you can with your chain shifted up three clicks from the big/big, so it’s not too heavy but you’ve still got a nice straight chainline—genius, you. Do you take the inside of the first corner and ram the manhole cover, or do you take the outside line and hope no one runs it wide into the barriers? Trick question—you do not have a choice, you are dead center of a mass of bodies and people are passing you on either side and you have not yet even entered the first corner. You enter the corner. It is Time. And through you go. You sprint again and tuck in behind the guy without a bandage on his elbow. He looks older, he looks like he has two kids at home and isn’t going to crash. The pavement is the worst you have ever felt. The front of the race enters the second corner a hilarious number of seconds ahead of you. This corner feels better. It’s single file, and you feel the tires bite as you lean into the turn. Maybe if it slows down next lap you can shoot the inside and make up a couple of places.

The rhythm settles, no pedaling, drift a couple of inches inside, now back over, lean it over, back on the pedals as soon as the bike straightens up, don’t stand up, just pedal faster, get right up on that guy’s wheel, come off the power a little sooner before the corner so you don’t have to brake, take it all the way to the curb. You can go faster.